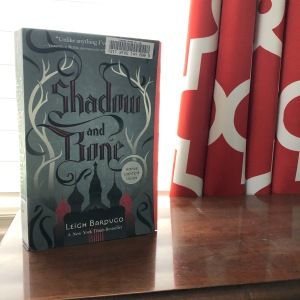 Description: Shadow and Bone introduces us to Alina Starkhov as she and her regiment are crossing the Shadow Fold, an area of complete darkness filled with monsters hungry for human flesh. Alina’s best friend is injured while crossing the Fold, and she unleashes a dormant power she did not know she possessed. Suddenly, Alina is taken from everything she has ever known and thrust into the world of the Grisha.

What I Liked: The last 50-75 pages held the only interesting part of the story because something finally happened other than Alina moping or Alina obsessing over one of the boys or Alina going to training and lessons.

I did find the magic system interesting and there is a slight twist (that I didn’t see coming) that sets off the only interesting part of the book. My favorite character was Genya. I hope we find out more about her as the series continues. And I will admit to a love/hate relationship with the Darkling.

What I Didn’t Like: Everything that happened, especially in the end, was way too convenient. I knew things would wrap up in a nice, neat little bow so there can be a love triangle in the rest of the series.

I also didn’t think there was enough world-building, despite the fact that 75% of the book held no action. You are just thrown in to the story and have to figure out what everything means as you go along. This book could have been 50-75 pages shorter considering nothing of substance happens.

Final Thoughts: I bumped my rating to 4 stars after the last 50-75 pages, but after reflecting on how I felt while reading the book as a whole, I left my rating at 3 stars. I will continue the series, only so I can read the Six of Crows duology, but I don’t have high hopes for the rest of the series.

You can order Shadow and Bone from BookDepository here. A small percentage of your order goes to supporting my blog.

2 thoughts on “Review | Shadow and Bone by Leigh Bardugo”