Hello, readers! I recently read The Lying Game by Ruth Ware, and it is my favorite Ruth Ware book so far! I am hoping The Death of Mrs. Westaway does not disappoint me. So many booktubers who usually hate her books have said Mrs. Westaway is so good, so I’m afraid I have my expectations too high! I think I know too much about the plot for that one going in too. But with The Lying Game, I had read the plot months ago, and then forgot what it was about. I think this is why I finally enjoyed an entire Ruth Ware book.

**Disclaimer: As with all of my reviews, I do post the entire plot synopsis before my review. However, I will always recommend for Thriller Thursday reviews that you skip the plot synopsis. Thrillers are better when you go in knowing little to nothing about the plot. Happy reading! 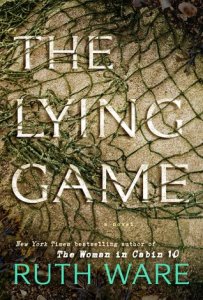 Plot: On a cool June morning, a woman is walking her dog in the idyllic coastal village of Salten along a tidal estuary known as the Reach. Before she can stop him, the dog charges into the water to retrieve what first appears to be a wayward stick, but to her horror, turns out to be something much more sinister…

The next morning, three women in and around London—Fatima, Thea, and Isabel—receive the text they had always hoped would NEVER come, from the fourth in their formerly inseparable clique, Kate, that says only, “I need you.”

The four girls were best friends at Salten, a second rate boarding school set near the cliffs of the English Channel. Each different in their own way, the four became inseparable and were notorious for playing the Lying Game, telling lies at every turn to both fellow boarders and faculty, with varying states of serious and flippant nature that were disturbing enough to ensure that everyone steered clear of them. The myriad and complicated rules of the game are strict: no lying to each other—ever. Bail on the lie when it becomes clear it is about to be found out. But their little game had consequences, and the girls were all expelled in their final year of school under mysterious circumstances surrounding the death of the school’s eccentric art teacher, Ambrose (who also happens to be Kate’s father).

Atmospheric, twisty, and with just the right amount of chill that will keep you wrong-footed—which has now become Ruth Ware’s signature style—The Lying Game is sure to be her next big bestseller. Another unputdownable thriller from the Agatha Christie of our time.

Review: The Lying Game is a bit darker than Ware’s previous two novels and I devoured it. The basic summary is four women come back together after fifteen years because a secret they have is about to be discovered. The story takes place in the present with flashbacks to the past. There is a lot of suspense in the first third of the novel as you try to guess what happened to the women when they were teenagers. You also get a side story from the main character, Isa, who recently had a baby with her partner.

All of the characters in this book are extremely unlikable in the best possible way. I was constantly mad at them for whatever reason. I was always upset with Isa because of her personal issues at home. Isa definitely suffers from some serious anxiety, and while I can relate to this, I think she may have been my least favorite character in the entire book. She treats her partner like crap and is super obsessed with her baby.

Final Thoughts: The Lying Game is definitely a slow-burn, so if that’s not your thing, you may want to stay away from this one. Normally I don’t like slow-burns, but much like The Woman in the Window by AJ Finn, I felt like it worked for this story. If you like stories like Pretty Little Liars, then I think you will enjoy this book.

Click here to purchase this book. A small portion of your purchase will be used to support my blog.

Thank you so much for reading my review! Let me know in the comments what you are reading!

4 thoughts on “Review | The Lying Game by Ruth Ware”