Today I am participating in the Digital Reads Blog Tour for Arcacia by T.A. Barua. 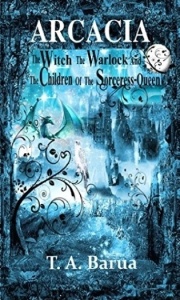 Plot Synopsis: When a beautiful sorceress-queen, Selina, spurns Setanor, a powerful, jealous northern warlock, an invasion of Western Arcacia begins. To save her newborn triplets from death, they are cast down a magical river to the New World, a place called, ‘London, England.’

Thirteen years later in a cold, Victorian London attic… The future of Sophie, an impoverished orphan looks bleak but everything changes, to her astonishment after a young witch arrives through her bedroom window with an incredible message and a warning. So begins her life in a beautiful, enchanted ancient world…

How do Sophie and her four friends summon the tremendous courage to rescue her long lost family while restoring Arcacia from dark, ruling forces? Mystical beasts, sceptres, powerful witches and daemon-trolls are just some of their challenges. Meanwhile, the dreaded terrifying warlock, Setanor and his witch-consort Lilith have sent a secret enemy to plan their downfall…

Pick up a copy of the book here or here.